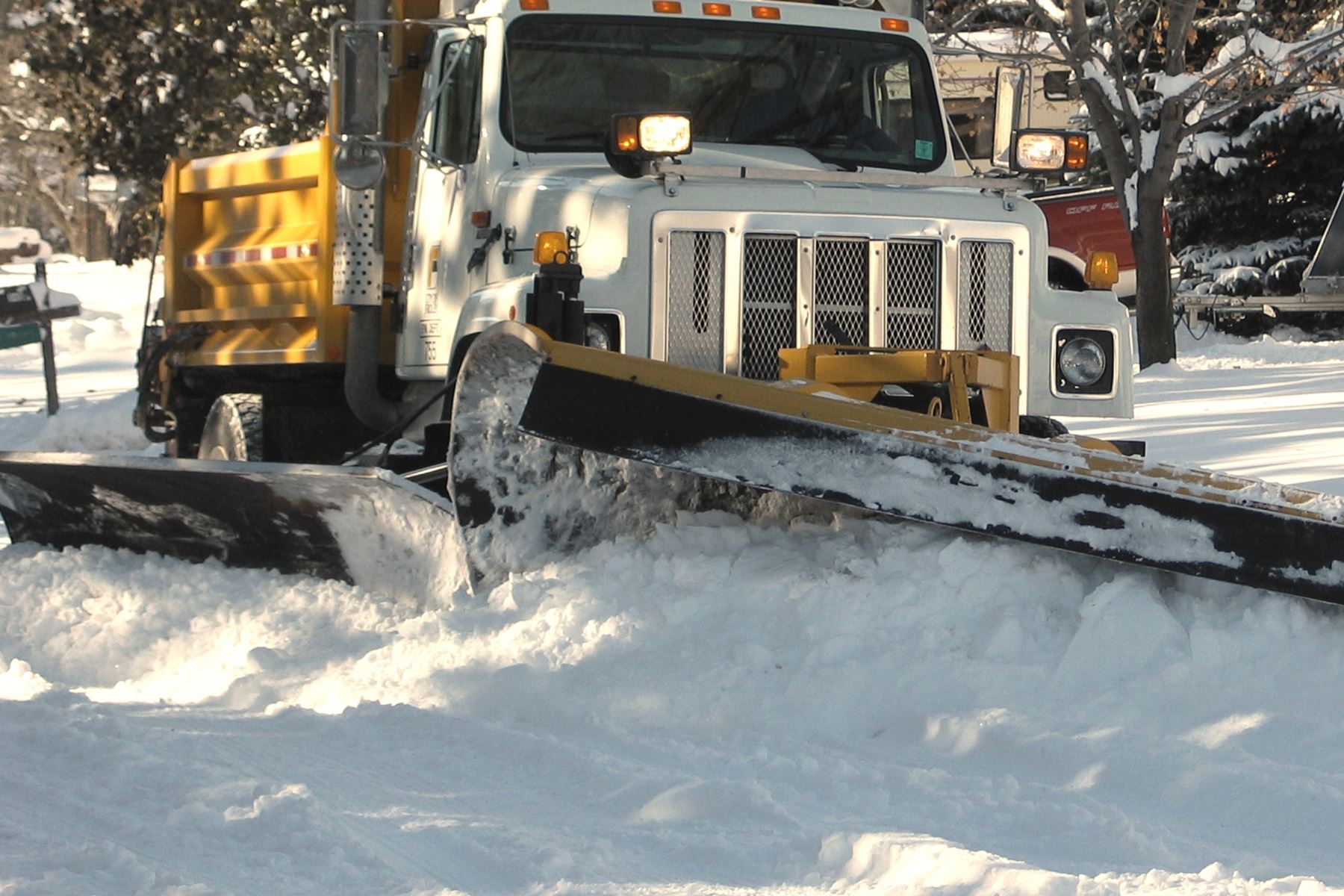 Minnesota winters can be long and brutal, even frustrating. Fridley Public Works makes safe, effective and efficient snow removal a top priority. Our 24-person snow removal team works long hours after every snowfall, we still need your help to clear roads as quickly and safely as possible.

The City of Fridley plows 107 miles of city roads, 80 cul-de-sacs, 18 alleyways and dead-ends, 17 parking lots and about 23 miles of sidewalks and trails.

Plows are big trucks and sight lines can be limited at times. These trucks don't stop or swerve as quickly as cars and they need extra room to turn. It is VERY IMPORTANT to keep children at a safe distance. No matter how tempting those big snow piles are, do not allow kids to build forts or play in the snow drifts near the street. We don't want anyone to get hurt.

Each snowfall, we rotate which streets are plowed first. Here's how it works: 1. Emergency routes or "redlines": Emergency routes are always the first priority after any snowfall. These redlines are established to ensure emergency vehicles can reach within one or two blocks of every home.

2. After that, we rotate starting points. Fridley is split into 11 districts, and each district has 4 different starting points. These rotate after each snowfall. If your street was plowed last this time, it won't be next time. 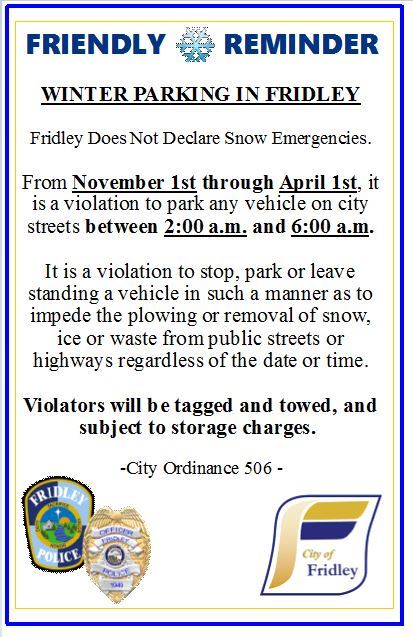 Parking on Fridley streets is prohibited between the hours of 2 a.m. and 6 a.m. from November 1 through April 1 (Chapter 506 (Unattended Vehicle ordinance). In addition, there is no street parking anytime while snow removal is in progress. Vehicles parked on streets during this time may be tagged and towed at your expense. This expedites and improves the snow plowing activities by City crews.

The second ordinance deals with Private Property Snow and Ice Removal (Chapter 514). This ordinance prohibits vehicles/people from pushing or shoveling snow onto or across City streets onto boulevards of private or public property. Property owners of the removed snow are responsible for their actions or the actions of any agent involved in the snow removal process. Penalties result in a notice of the first violation with a second violation penalty of $50, third $200, fourth $500, not-to-exceed $700 and 90 days in jail plus any City cost.

If you have any questions regarding these ordinances or would like a complete copy of the ordinance, you may contact Public Works at (763) 572-3566.

For street snow removal, the City currently deploys 19 pieces of equipment, 12 major and 7 minor. Each of the 11 snowplow districts have a major piece of equipment dedicated to clearing snow from its roadways. These 12 major pieces of equipment are made up of 5 dump trucks with one-way plows and wing plows, 1 flatbed truck with a one-way plow, 1 dump truck and 2 pot patcher trucks with one-way plows and underbody plows, and 3 loaders with directional plows and wing plows. Six of these trucks are also equipped with sand spreaders for use during ice and slippery conditions exist. The 7 minor pieces of equipment are used to supplement the major equipment and to clear cul-de-sacs, dead end streets, improved alleys, municipal parking lots and concrete sidewalks. These 7 pieces are comprised of five 4x4 pickups, one 1-ton 4x4 truck and one sidewalk plow/snow blower.

We work hard to keep a balance between expenses and equipment needs to serve our community effectively and efficiently.

Snow removal operations begin after the snowstorm has subsided, normally in the early morning hours. However, if the storm ends in late evening or early morning hours, the crews are called out in an attempt to clear snow emergency routes by morning rush hour. If a storm is predicted to last unreasonably long, or heavy accumulations appear imminent, full snow plowing operations begin on the snow emergency routes in eight districts when accumulation becomes hazardous for driving. Based on different storm situations and severity levels, the starting time frames are flexible. During blizzard or high wind storms, plowing does not commence until the storm subsides.

Snow emergency routes are plowed first ("Redline Collectors"). It takes approximately 2 to 4 hours (depending upon the snowstorm) to complete these routes. These streets have been declared snow emergency routes because they allow residents and emergency vehicles faster and better access into all areas of Fridley.

After the snow emergency routes have been cleared, it takes approximately 6 to 8 hours to complete snow plowing operations on the remaining streets. This results in providing clean, safe streets 10 to 12 hours after an average snow storm.

The City is divided into 11 snow plowing districts after the snow emergency routes are plowed. In each district, there are four alternating starting points. After each snow, the start point will change.

The City plows 30 miles of trail and sidewalk.

City plow operators make every effort to avoid damage to areas adjoining the street. We ask you keep landscaping, garbage containers, recycling containers, etc. from obstructing right-of-way. The City is not responsible for damage of these items due to snowplowing.